Visit Detroit helped with trip planning and passes for some of the activities mentioned below. All opinions are my own.

If You’re Not Giving Detroit a Chance, You’re Missing Out

“Why would you go there?”

Apparently, my downtown Detroit weekend plans struck some as odd. Really, I should have expected it. It’s a question I asked myself just a few years ago. Growing up in Traverse City, followed by life in Grand Rapids, I did not spend a lot of time on the east side of the state. What I heard about Detroit – that it was dirty and dangerous – made me not want to visit.

But… the tide’s changing. Recent reports of growth in the city made me want to find out for myself.

So, I did. I took my family for a long weekend away. We spent three days in downtown Detroit biking, walking, and playing. Not once did we feel unsafe.  In fact, we had been in Chicago the week before and in contrast, Detroit was a whole lot cleaner, spacious, and greener than the windy city. While you always need to keep your wits about you in a big city, I can say that downtown Detroit made us feel right at home. There’s an energy in that city right now that comes with hope and possibility and revitalization. Read on to see how we spent our time. I hope you get a chance to visit soon yourself.

When You Go, Start In the Center Campus Martius Park in the center of downtown changes with the seasons. In the summer, it’s an urban beach with sand, toys, bar and more. In the winter, it’s an ice rink. Get Yourself Down to the Riverfront ASAP

Wow. The Detroit Riverfront should win an award for creating a space where people want to be. Gorgeous walkways, beautiful gardens and parks, and plenty of trendy seating options go on for miles. We rented bikes (wish we would have thought to bring our own) and spent hours cruising along the riverwalk and around the city. They have a new rails-to-trails project that cuts through the city, the Dequindre Cut.  You’ll like it because of the graffiti art, it’s below street level, and it takes you out to the Eastern Market. 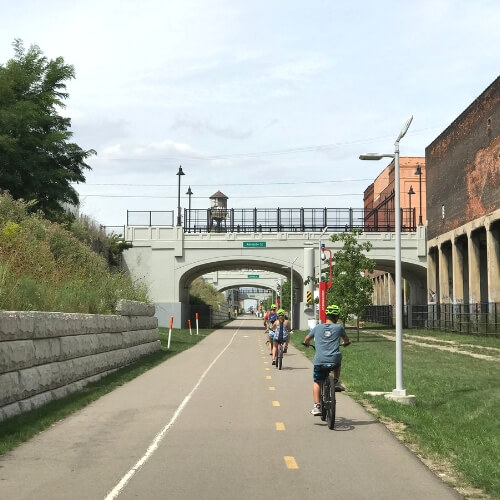 Eastern Market, for the Win

I’m a market kind of girl. I just love everything a market represents, and Eastern Market did not disappoint. FIVE sheds of fresh stuff to choose from – it was sensory overload in the best kind of way. If you visit the Saturday Market, find that cinnamon role lady from the thumb and stock up on those delicious morsels. Wish we would have brought home more and frozen them!! Detroit and Grand Rapids: What Can These Major Michigan Cities Teach Each Other?

A Downtown Hotel Makes a Great Home Base

We LOVED our room at the DoubleTree  – Fort Shelby. I mean, it came with a fish for the kids to feed! As a family of five, it’s hard to find hotels in cities that can accommodate us. But our 2-room suite had more than enough space for us to spread out. And since it was located just a block away from the people mover, we could get around the city without driving and worrying about parking. We didn’t even use our car the first day we were there. Art is a Part of Detroit’s Comeback

I’m no artist. But ArtPrize has taught me a lot about what art can do for a city, and Detroit is expertly applying that lesson, too.

Stroll down The BELT with your kids and you’ll see what I mean. The DIA is another place you’ll want to experience while in town. Just being inside of the building inspires. If you do visit, don’t miss the famous, gigantic, Diego Rivera Detroit Industry Murals on two walls of the inner courtyard. Adventure, Powered by Your Own Two Feet

Going to the city means lots of walking, at least for our family. And we wouldn’t have it any other way. We love popping into buildings, exploring things that you’d miss in a car.

The art deco Guardian Building is a perfect example. Or the Ren Cen. Plan to spend part of a day just walking around the city. And when your feet get tired, hop on the People Mover. It’s under $1 a person and is a great way to see the city. Kids love it. The Outdoor Adventure Center Took Us By Surprise

The DNR managed to put the great outdoors in the middle of downtown Detroit – great news for kids.

The kids loved the experience simulators and hands-on exhibits at the Outdoor Adventure Center. I loved the low price tag.

I’d say this place is good for kids up to age 12. Plan to spend at least a few hours playing, snowmobiling, hunting, fishing, kayaking, and practicing archery when you visit. 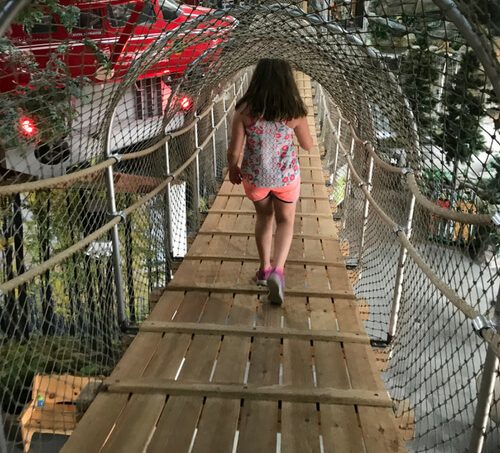 The Food Scene is Legit

I could have titled this article “we ate our way through downtown Detroit” and it would have been true. Let’s just say we took the Coney challenge, stopped in at Shake Shack, found out that ice cream in the motor city is wonderful, and got a little too excited at For the Love of Sugar – consuming more than our fair share of cake. I’m talking sports last because everyone already knows that Detroit is home to major league sports teams. But many people drive in for a day, cheer their team, and then leave.

If you have the chance, stay a little longer and start exploring. The neighborhood near the new Little Ceasars Arena, Brush Park, is undergoing major revitalization right now and it’s amazing to see these historic mansions in various states of transformation.

It’s a great time to cheer for your team and cheer for Detroit, too.

I can’t wait to visit again – there are so many more things for us to explore, like the Motown Museum.

Do you have tips or destinations for us to consider? Please drop us a note in the comments.  If you do plan a visit, Little Guide Detroit and Visit Detroit are two amazing resources. 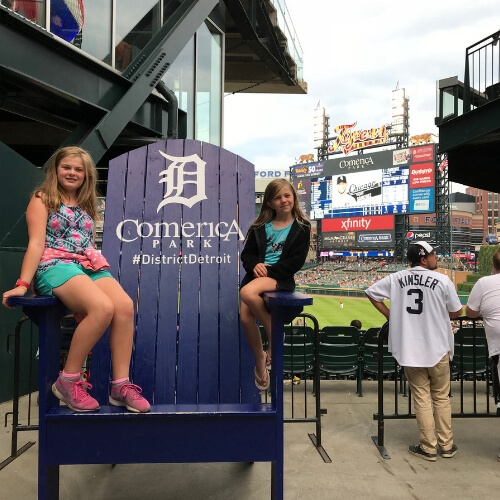