There’s the city and then there’s the region that claims this name.

The city of Grand Rapids is divided into quadrants: NE, NW, SE, SW and downtown. Each area has its own flair. Architecture depends primarily on when that part of town was developed and can vary widely from one neighborhood to the next. (And often even from one street to the next!)

The core of Grand Rapids has seen rapid growth and redevelopment since the opening of VanAndel Arena in 1998 — and the city shows no sign of slowing.

Grand Rapids may be a small city on paper, but its cultural scene is booming, thanks to ArtPrize and the many museums in the city.

Foodies are surprised when they find the great number of local eateries hidden along our streets, and it’s even better when they discover they are living in Beer City, USA.

Towns, cities, and suburbs surrounding Grand Rapids also have a flavor of their own. Some communities are primarily agricultural like Caledonia; others, like Grand Haven, are situated on Lake Michigan and are a mecca for beach life (and tourism).

No place is perfect, but we think that you will find the perfect place to raise your family in one of Grand Rapids’ neighborhoods or surrounding communities.

Grand Rapids Suburbs to the East

Why people love to live here: The east of Grand Rapids suburbs are a great mix of urban, suburban and rural vibes. These communities are close to the airport as well as the 28th Street corridor. Reeds Lake is a huge draw of East Grand Rapids and a very walkable, shoppable downtown.

You should know: The schools! East GR is continually ranked in the top 20 in the state. You pay a premium for property taxes, but you get cool perks like roadside leaf cleanup and plowed sidewalks in the winter. Covering about 68 square miles, including rural back roads, Forest Hills Schools is known to have more snow days than other area schools. Why people love to live here: Jension, Hudsonville, and Grandville are very family friendly. They have great schools, established neighborhoods, and dozens of parks.  Grandville has a bustling shopping and restaurant corridor near RiverTown Crossings Mall.

You should know: Jenison schools offers a Spanish Immersion program which is a big draw for families across West Michigan. These west Grand Rapids suburbs host fun festivals and holiday celebrations year-round. 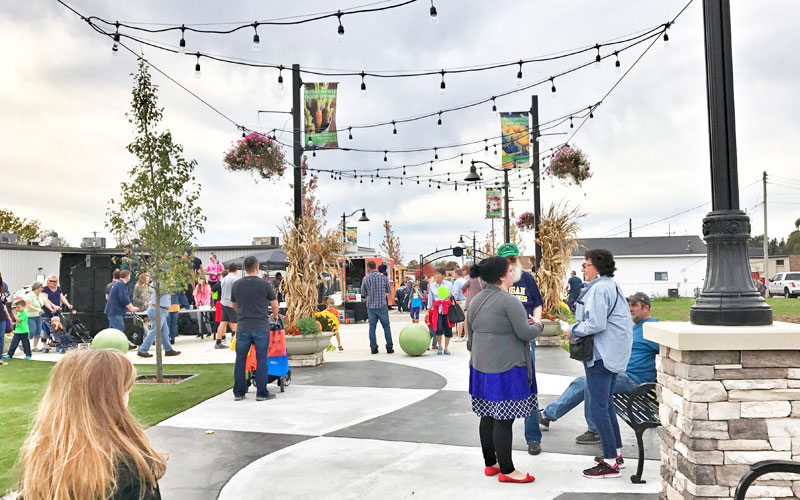 The quiet communities northeast of Grand Rapids provide a small town feel with close access to forests, lakes and golf courses, while still only being a short drive away from all the attractions in downtown Grand Rapids.

Why people love to live here: Rockford, Belmont, and Cedar Springs residents love their close-knit communities and friendly neighbors. They can take full advantage of outdoor living with easy access to Rogue River, Cannonsburg, and dozens of parks and trails.

You should know: The Rockford Dam overlook is an iconic part of Rockford, and hooks up to the White Pine Trail. Belmont gives you easy access to both Rockford and Grand Rapids, but with lower property taxes. In Cedar Springs, you’ve got the edge on getting “up north” on weekends before the highway is packed. Southeast of Grand Rapids is bustling with development. Residents love their Chick-Fil-A and quick access to the city from M-6, while still appreciating a quieter, more rural pace of life.

Why people love to live here: Points go to Kentwood for diversity. Schools and neighborhoods celebrate many cultures and family types, and residents love that. It’s also a very affordable area, with housing options ranging from rentals to condos to homes. Caledonia locals love that they’ve found a modern-day small town. This tight-knit community has the quiet vibes of yesteryear, coupled with modern updates and community hot spots.

You should know: Kentwood is huge with an unusual shape — it’s not just the Woodland Mall area. Caledonia is really into parades and celebrations like Harvest Festival, Memorial Day, Christmas, and 4th of July.

Southwest of Grand Rapids you will find charming, farming communities with quaint downtown areas and an appealing, low-cost of living. Not to mention Byron Center is home to a 2016 National Blue Ribbon Award-winning school!

Why people love to live here: Residents love the quiet, chill vibes. They love the smaller town feel, proximity to downtown and rural areas, as well as friendly neighbors. Residents are active in their community, with school and local events well attended.

You should know: If you’re a travel lover, Wyoming is a great spot to live because you have quick access to just about any highway leading into West Michigan and beyond. Byron Center is a fast growing suburb of Grand Rapids, with homes and schools in high demand. Why people love to live here: Northwest Grand Rapids residents love their small towns with their close proximity to downtown. There is lots of wildlife, the epic Millennium Park, Blandford Nature Center and festivals galore.

You should know: Walker is comprised of four neighborhood areas: Alpine, Northwest, Standale and South Walker. Springtime flooding is common for residents living near the east side of Comstock Park (where Grand River runs). Sparta is home to a new vineyard and brewpub, Stoney Ridge Vineyards. Grand Rapids has over 30 neighborhoods, all with a vibe of their own. Popular spots are Heritage Hill, Creston, Eastown, Ottawa Hills, Ken-O-sha, Garfield Park and Alger Heights. Whichever neighborhood you choose, chances are you’ve found a kid-friendly community with lots to do for families within walking distance.

Why people love to live here: The calm hum of each neighborhood lends to a chill and lovely space to call home. This ‘small city with a big city vibe‘ draws people to live in Grand Rapids city limits. Families love the walkability and easy access to these perks and fun things to do.

You should know: When people talk about Grand Rapids, many picture just the downtown area. But the actual city of Grand Rapids spans as far as Frederik Meijer Gardens to the East,  just shy of Horrocks Farmers Market to the south, the tip of Millennium Park to the West, and just below the Whitecaps Stadium to the north. Why people love to live here: You get Lake Michigan life and city amenities in one. Grand Haven is THE beach town of Lake Michigan. Residents and visitors alike can’t get enough of Grand Haven’s sandy shores, ice cream shops, and its two lighthouses. Muskegon is for lake lovers who need equal proximity to “Up North” and the big city of Grand Rapids. Muskegon life is all about the water, outdoors and adventure.

You should know: As you can guess from the name, Holland has Dutch heritage, and they’re proud of it! In addition to their annual world-renowned Tulip Time festival, visitors and residents alike enjoy Windmill Island gardens, as well as Nelis’ Dutch Village. Being a beach town, expect lots of Grand Haven visitors in the summer. Muskegon is changing from a sleeper town to a hot spot for families. As housing prices climb in the Grand Rapids metro area, Muskegon is an affordable option (for now).