Pssst…I’ve got some Super Secret Santa Intel for You

I know. He’s supposed to be running a massive operation at the North Pole, and may be he does, but at night, he lays his head on his pillow in West Michigan, right next to his beloved Mrs. Claus.

And every year at Christmastime, he is spreading his holiday joy to kids around West Michigan.

So if your favorite Christmas event is taking your kids to Santa, this is the man to see. No one else compares.

This Santa will NOT be at Frederik Meijer Gardens this year. On his website, Santa encourages families who have met him at FMG to visit him at any of the other spots he will be this year.

Santa is BACK at the Grand Rapids Santa Parade. After a 2-year hiatus, the parade is ready to dazzle once again, with the real Santa at the helm!

Where to See All the Santas Around West Michigan

Santas are popping up everywhere in West Michigan this year. Here’s where to get a meal with Santa, try a photo op, see him in a parade and more!

The Story of how One Man Became the Real Santa Claus

After hearing dozens of friends rave about this man, I wanted to know how Kraig Haybarker become such an icon in our community.

I called him up a couple of years ago and got the scoop.

He’s been calling and emailing me ever since, giving me updates to his schedule and answering questions. I love that I can show my nieces the call history in my phone – Santa called me.

Have you met Kraig, the real Santa?

When he isn’t welcoming children at the Lowell Riverwalk or waving to fans at the Grand Rapids Santa Parade, Santa can be spotted at places like the Lowell Meijer or Spring Grove Variety Shop in his everyday clothes.

And if he catches a child looking at him curiously, he will introduce himself and maybe even give them a candy cane from his leather bag.

It’s his white beard, actually, that turned Kraig into Santa in the first place.

Kraig says he has had a white beard forever. One Christmas, over 20 years ago, his beard had gotten longer than usual.

Kraig was greeting guests at the Christmas Eve service at Lowell First United Methodist Church when a little boy came through.

“He reached up and shook my hand and just said, ‘Hi Santa,’ and kept right on going!” Kraig laughs. The kid didn’t even pause – he simply knew that Kraig was Santa!

So Kraig decided to let his beard grow for fun. Not to become Santa, but just to see what it would be like to have a Santa beard.

“I’ve always thought (my white hair) was a curse, but once I decided to become Santa it became a blessing,” he says.

The next summer he was at the Lowell Chamber of Commerce when Executive Director Liz Baker spotted his beautiful beard and asked if he’d be Santa for the city of Lowell that year.

We can all Thank Lowell (and Liz!) for Finding Santa Claus.

“I hadn’t given it any thought at all!” says Kraig of the Chamber’s request. “I had a beard and white hair and that was it!”

Fortunately for Kraig, his wife Jody is a master seamstress. She sewed his first Santa suit.

And the moment he stepped onto the Lowell Showboat in 2002 to gather children’s Christmas wishes, there was no going back for Santa Claus.

Jody lovingly created an indoor and outdoor Santa suit for Kraig, and now has her own matching Mrs. Claus wardrobe.

He even has a custom carved chair with his name on it, where he meets his visitors.

They moved the Santa room from the second floor of the showboat to the first floor so it would be more accessible and knocked down walls and fully decorated it for Christmas.

The Haybarkers Have Brought Christmas Joy to Lowell

And to West Michigan.

Kraig’s work has expanded to include the Grand Rapids Santa Parade and corporate and private events. People always want to know where to find him each year.

He was the hugely popular Santa at the Breton Village Mall until it was torn down, and for years was a mainstay at Frederik Meijer Gardens.

His favorite stint has always been in Lowell, though, his hometown.

After decades of Santa greeting children on the Lowell Showboat, they had to move operations to the Lowell Chamber of Commerce. The aging Showboat was deemed unviable for visitors.

The extra room at the Chamber of Commerce had sat abandoned for years, the big beautiful stone fireplace all dusty and dirty.

Children weren’t sure about this, but Kraig and his wife were undeterred. They would make Christmas in Lowell magical, showboat or not.

They whipped that place into shape with a little bit of magic and a whole lot of elbow grease. The put an electric fire in the beautiful stone fireplace and scrubbed, painted and decorated until Christmas started shining through.

“We got a lot of comments from people that they thought this was nicer than the showboat,” says Kraig.

Mrs. Claus started keeping track of Lowell visitors years ago and Kraig says they average 1,000 or more, just in Lowell.

Add in all his other visits with children around West Michigan, and that’s a lot of wishes to keep track of!

“In my wildest dreams, even when I decided to let it grow long that first season, I never thought about becoming Santa,” says Kraig. “I was just (wondering) what it would look like AS a Santa.”

If you’ve ever met him, though, you’d know that this is his calling. There’s a reason he’s always had the white hair, and that that little boy saw him for who he really is.

Because love and kindness has always been in Kraig’s heart.
“I love kids,” Santa says. “It’s the kids I think that make it so rewarding.”

Even when he’s not making lists and checking them twice, he’s blessing kids around Grand Rapids.

GRKIDS readers have reported receiving letters from Santa after they write to him and he’s always ready to greet a child with a smile, no matter the time of year.

“He is by far, the best, and the real Santa,” says Kathy Shaffer of Grand Rapids.

If Santa notices a kid in public looking at him intently, or glancing curiously in his direction, he will go right up to them and ask mom or dad if he can chat with the child for a minute.

“You can tell that I’m Santa,” he smiles.

He carries his Santa business cards year round, which lists his website where children can see pictures of him and Mrs. Claus.

Santa loves creating family memories that will last a lifetime. They can look back at their photo with Santa, or remember that time they spotted him at Meijer, and smile.

He wishes everyone could keep the love and joy of Christmas going year round.

“That’s who I am and the reason behind what I love,” says Santa.

And that’s how I know that we have the real Santa Claus in Grand Rapids.

Kraig’s schedule is posted on his website, but we’re putting it here, too.

Kraig will NOT be at Meijer Gardens this year.

He writes on his site, “To families that visit me at Frederik Meijer Gardens, I will not be appearing at the Gardens this year. Please visit me at one of the (other) locations listed.”

This GR Organization Needs Your USED Toys for the Holidays! Plus, Toys for Tots & Angel Tree Info

*Tickets on Sale* New Holiday Light Show in Holland: “Magic at the Mill” for 2022 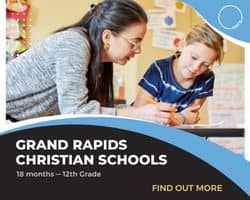